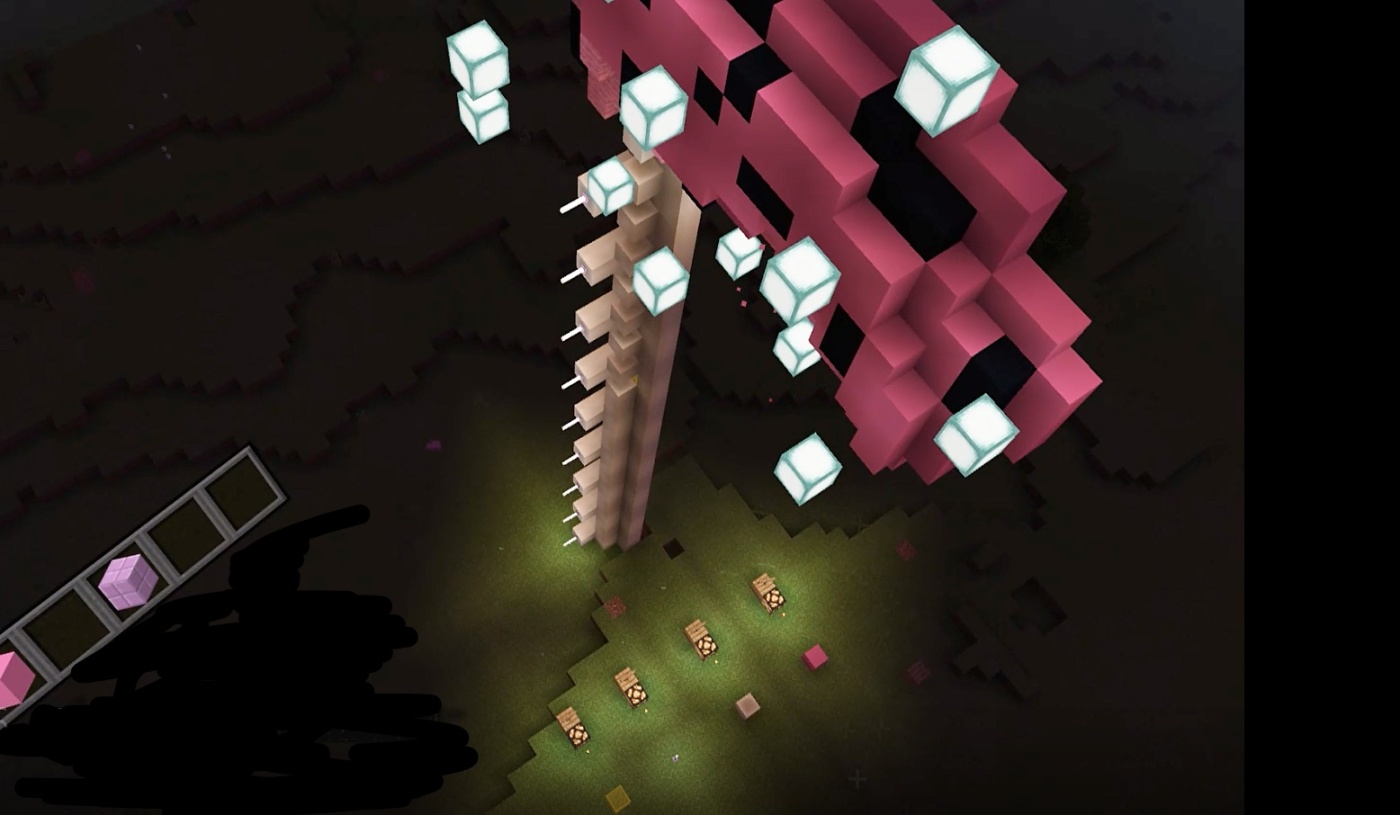 The VR School Study has been a two year journey in school-university collaboration. Throughout this time there have been many moments of frustration but also of an excitement that can only be sparked by collective intellectual endeavour. Among students there has also been frustration when the technology fails but these times are in contrast to what can only be be described as moments of pure learning joy.

Sadly, joy is not something that is spoken about enough in relation to schooling, and especially in regard to high school science classes. The joy of discovery is, of course, a central feature of the discipline of science, especially after the trials and tribulations of long periods of hard thought and experimentation. This quote from a lecture published in the journal Science back in 1936 captures the delight of scientific inquiry:

“While it is true that scientific men (sic) must make an impersonal study of the laws of Nature, there is ample evidence from historical records of the joy they have felt on achieving their goal. Newton, it was said, was so agitated when his work on the law of gravitation approached completion that he had to beg a friend to complete his calculation. …Harvey (the first to describe how the heart pumps blood around the body) said that ‘the pains of discovery are amply compensated by the joys of discovery.’ …The joy of the creative intellect, whether in art, literature or science, is one of the most exalted human emotions.”

How often do students experience the joy of scientific inquiry in high school science classrooms? This is a question worth asking because learning through discovery should be serious fun. How have technologies, across the ages, been instrumental in producing feelings of curiosity, wonder, excitement and that ‘exalted’ human emotion, joy? These emotions are intrinsic to the ‘creative intellect’ and they lay at the very heart of ideas in broader educational discourses about student engagement, school climate and motivation for learning.

During the VR School Study there have been moments of pure joy. As part of a unit of work in science, Year 9 students (14-15 years old) were asked to research an organ of the body, model and label it in desktop PC Minecraft Win 10 or Pocket Edition on mobile devices, and then import it into Win 10 Minecraft VR run on networked Oculus Rifts. There, they continued collaboratively building and refining the model in preparation for presenting what they had learnt about that body part to an audience.

Some examples of the pure joy of learning stand out. For instance, the first time a group of girls imported the levitating eyeball they had built in desktop computer Minecraft into Minecraft VR, there were squeals of excitement, raucous laughter, and a rapid flow of ideas about how to refine the model. They flew under and around the eyeball which was as large as a house and then into its interior via the eye’s lens. When they met inside the eye, and started lighting it up with torches, the amazement of the experience was palpable. A screenshot of the eyeball is below and the scale of it is discernible by the box on the ground which represents 1m x 1m. The square gap on the top of the eyeball was  used by the girls who would fly high and then dive into it. 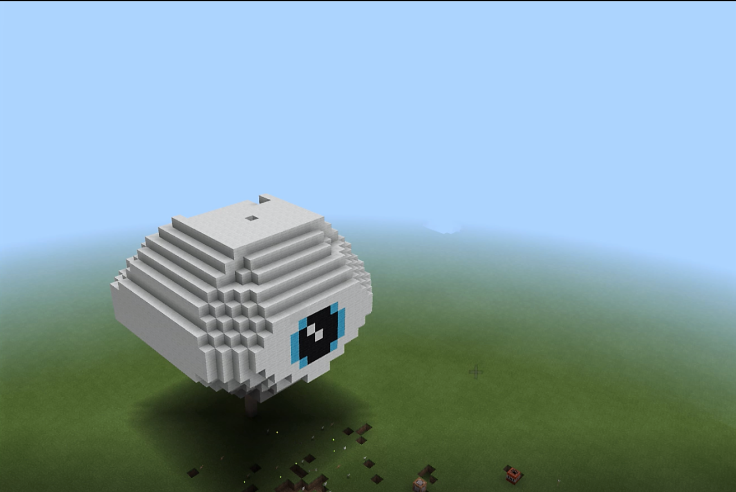 A group of boys had built an eyeball with an optical nerve attached to it which the player could run through until they reached the internal part of the eye. They then began to make a rollercoaster for others to tour the eye with plans for it to extend through the optical nerve. The sheer fun of running up and through a nerve while discussing the function of it was wonderful to observe. 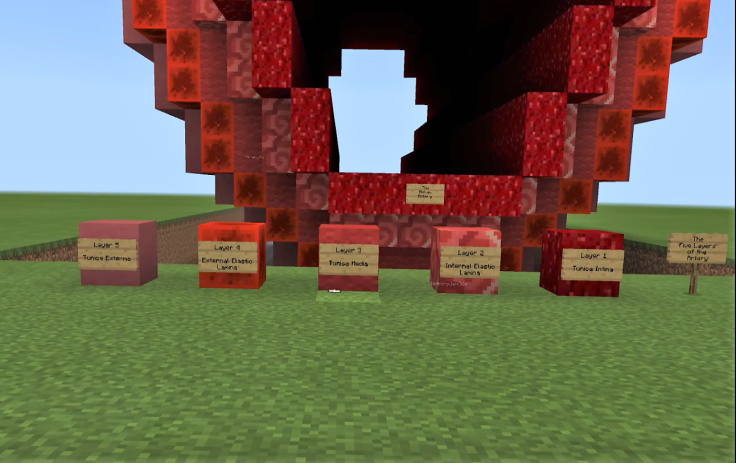 A group of boys took great care in building a spinal column with nerve endings, spinal fluid (or spinal juice as one fellow called it) attached to a detailed brain in cross-section. In VR, the structure was as high as a skyscraper and flying up and around it as they commentated on what work was still required was an astounding experience. They had provided, at ground level, an informative key to parts of the model. To hear students talk authoritatively and with great energy about how they went about selecting materials to try to accurately reflect the biological components of the spine, nerves and brain, while simultaneously working to improve the representation, provided a glimpse into the power of virtual reality for learning. Below is a screenshot looking up at the spinal cord with nerves and the brain; the floating white cubes are lanterns to illuminate it at night, although one boy did remark they might be thought of as electrical impulses emitting from the brain.  The feature image for this blog post is a screenshot looking down at the brain at night.

While the study is not all smooth sailing, with the technological hitches demotivating some students, it has yielded insights into how collaborative inquiry using immersive VR can promote deep, authentic learning. The discovery component is twofold. Firstly there is a visceral discovery in how much more wondrous 3D models and cross-sections can look and feel in a truly immersive environment; the uniquely embodied and affective qualities of an experience that it is all around you compared with looking at or generating something on a computer screen. Secondly, there is discovery in researching and applying what is often fairly dry theoretical scientific knowledge in a process of collective creative intellect stemming from collaborative experimentation with the learning affordances of VR such as manipulation of size or unique navigation techniques (flying or diving).

The study provides a tantalizing glimpse into the (near) future of immersive education.

Keeping it real – A/Prof Erica Southgate (who is still recovering from flying around that skyscraper of a brain!)