Research papers and teaching resources are available on the VR School website under the Resources tab and there is a book for those who are interested:

The VR School Study has featured in an interview published by the Independent Schools Association of NSW (AISNSW). The interview covers areas such as leveraging the learning affordances of VR to develop deeper understanding, problem-solving and creativity with students. You can read the interview here.

As we move into Phase 2 of the VR School Study, the team thought that we would give you a quick video update on what we have learnt so far and what we hope to achieve over the next few months. Here is Associate Professor Erica Southgate with the low down!

And how cool is the featured picture (top). It is a student work sample from Phase 1 of the study. On the left is a bluebell that the student created in Minecraft VR and on the right is how he labelled the cross-section of the flower by drawing on his research on the different parts and functions of a plant.  He took Erica on an amazing guided tour of his creation where they both flew around the flower (like bees) while he explained the meaning of the labelled cross-section to her. It was a thoroughly researched scientific experience and great fun to boot! 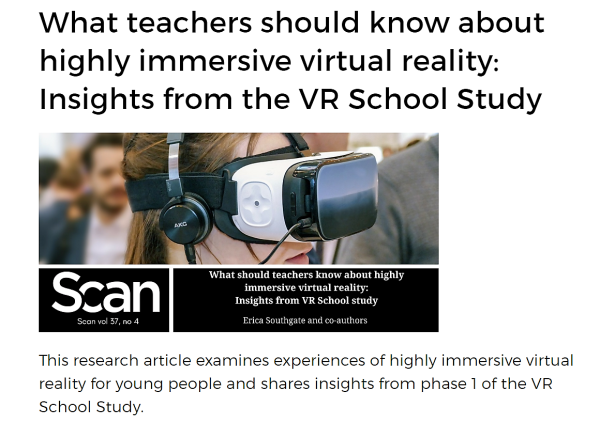 This is the second article we have published from phase 1 of the VR School Study. This article reviews the literature on immersive virtual reality and children, and examines ethics and safety, technical issues, and the role of play when learning in highly immersive virtual reality.  It is co-authored with teachers from Callaghan College, Newcastle, Australia.

To cite this article in APA:

‘VR is really cool because different types of learners are able to effectively absorb the information they need to be taught. It’s also fun, and has a reputation for being fun.’

Fifty four students aged 13-15 years participated in phase 1 of the research. As the quote above indicates, the majority students were excited to be given the opportunity to use Minecraft with the Oculus Rift to do their science or ICT lessons. Some talked about the experience as being ‘FUN, FUN, FUN’, saying they ‘would recommend it to anyone.’

Other students thought that immersive VR had the potential to transform learning in the classroom:

‘I personally think learning with Virtual Reality will change students perspective of learning in a majorly good way as it gives the student a whole new way to learn and interact with the stuff they are learning.’

Some were more equivocal, observing that ‘Although it (VR) removes distractions, it also adds them’ and it ‘was easier to get distracted by VR (version of Minecraft) than computer (version)’. The distraction factor may be a result of the novelty of the experience, however it is worth investigating further how the intensity of the experience — the sense of presence and freedom of agency (autonomy of navigation, manipulation and creativity) which Minecraft VR allows — may interfere with on-task behaviour.

A few students also mentioned cybersickness as a ‘negative’:

‘Our virtual reality tasks are entertaining and more engaging than any other normal science class, although while engaging in this task I have motion sickness which causes me to finish earlier than I normally would. There aren’t really any downsides apart from motion sickness.’

The student perspective from Phase 1 of the VR School project has yielded several ‘leads’ to be explored during phase 2 of the study which will be conducted in the first half of 2018. Harnessing student enthusiasm for immersive VR for increased on-task learning is vital if the technology is to enhance education.

Furthermore, as part of the project we screened for potential susceptibility to cybersickness and educated students about the condition, actively checking on their well-being while they were in VR. Students themselves exhibited good awareness of cybersickness and appeared to monitor how they were feeling during the VR experience, with most opting to get out at the first signs of discomfort. While there were a very few cases of cybersickness witnessed by the team, we will more closely examine the phenomenon from the student perspective during phase 2 of the project.

Associate Professor Erica Southgate on behalf of the awesomeness which is VR School team.